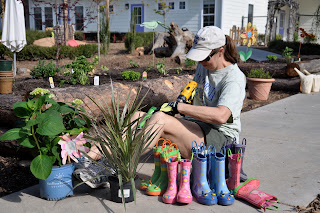 Our community never ceases to amaze me. Thank you, thank you to all of the amazing wonderful superhero parents, grandparents and teachers for giving up their Saturday to help spruce up the playspaces for Garden Day. The name "Garden Day" recalls a vision of delicate potting and trimming fragrant roses. Delicate this day was not! The school was literally buzzing with bandsaws, power drills, sanders, and the clatter of wheelbarrows full of soil. Our families helped build two large slide/climbing structures, a cool tire climber, re-furbished a beloved red playhouse, as well as make some existing structures more user friendly. The volunteers created an interactive water-wall, as well as a magnetic pvc pipe wall. They sorted and created a “loose parts store”, hung all manner of doo-dads, planted in garden beds, tires, boots, and just about anything that will hold a plant! Some brave souls watched the kids as other parents worked on the spaces. The crew was treated to Chef Nate’s muffins, as well as his salad trio and banana pudding for lunch, whipped cream and all. The rain came late in the afternoon, the perfect timing for all the thirsty new baby trees, shrubs and flowers. All and all, it was an exhausting and incredibly gratifying day. 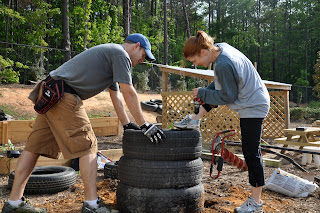 While the banana pudding was truly divine, the real treat came on Monday morning. The kids swarmed the new spaces like bees to honey. And while a few baby plants may have met an early trampled end, the kids had a blast navigating and exploring all the new playground additions. Kids climbed, poured, sorted and played their hearts out. Throughout the week, the kids watched as the little seedlings sprouted through the dirt, and eagerly watered on rain-free days. Another heartfelt thank you to everyone who made that kind of magic happen. More then just extra hands, the help was an awesome reflection of our shared vision as a community. 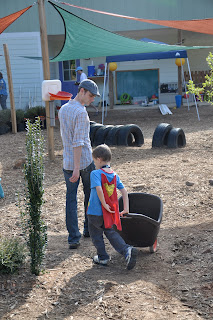 Birds of a Feather...

Signs of spring: budding trees, rainy days, sprouting tulips, growing gardens, and now at TLS, hatching chicks. With a borrowed incubator and fingers crossed, the half day classroom started their chick adventure just about a month ago. Ms. Meg’s family has been raising chickens for many years, so under her guidance this class of would be Mommy and Daddy Chickens carefully placed their eggs and monitored the incubator temperature daily. They studied up on the phases of development, the differences between a fertilized egg and the ones we eat every day, “candled” the eggs to see the chicks moving around (like an egg ultrasound!) and patiently counted down the 21 days until they were due. As any parent can relate, the 21 day mark came and went without so much as a *aheem* peep from these guys. On the morning of Friday, April 13, the kids came to school and saw that several of the eggs had begun to crack. Throughout the day the kids watched the wiggling and rocking and heard their cheeps as the chicks made the slow progress out of the egg. As one chick chirped, another egg next door would began to jerk.


At 12:20 April 13th, the first chick pecked free from his shell. IT. WAS. SO. AWESOME. In honor of her birthday, they named the first chick Wendy! Monday morning, the half day class met their new brood of seven baby birds. As of now, two of the seven are named Wendy and Cinderella (here's an official plug for Super Jessica the chicken). Words don’t really express how cool this was to watch. Thank you to Lesley, Meg and Kelly for letting everyone visit your sweet chicks. Check out the photos and video at the bottom of the page. 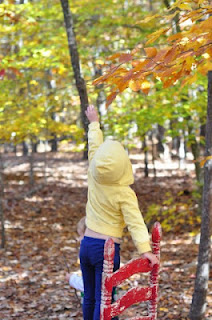 Here at TLS, we spend a good chunk of our day outside. One of my favorite sayings heard around here is that there is no such thing as bad weather, just bad clothing. If we are not on one of our many super cool play spaces, then we are often taking advantage of the woods surrounding us, the creek bed, and an all time favorite, the Magic Tree.

Many of our parents ask about this much talked about “Magic Tree.”What is it? Why is it magical? I offered to take a parent there once, but he insisted that he keep it in his imagination. I am here to lift the mysterious veil. Here are the Magic Tree stats: It’s a small clearing with a large tree that has fallen over onto a few other smaller trees. Does that sound magical? Not really, but that’s because we are boring grown-ups. When we first opened this campus, the Pre-K kids discovered it on a walk and gave it the famed name. Since then it has been turned it into a rocket ship, a balance beam, a kitchen, a super-hero hide out, a canvas, a set of monkey bars, an excavation site, endless tunnels, a fire station, a loom, a fort, a zoo (both real and imagined), a pirate treasure box, a fairy treasure box, a meeting place, a quiet place, a loud place.... and the list goes on. In the winter it is a bright spot surrounded by crunchy leaves and naked trees. Come spring, we are literally watching the tree buds unfold in front of us. In the summer it is a cool escape from the Carolina heat, and the fall? I can’t even begin to describe the autumnal palette that falls from the trees. What makes this place magic is of course our kids. Where you and I may see potential firewood, they see unlimited possibilities. 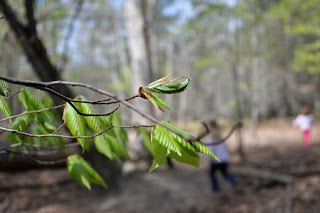 There is one big lesson that we as a school can take from the Magic Tree- an amazing playspace is not always a big expensive play structure. It is a beautiful space and opportunity to explore. A zillion studies herald the virtues of playing in nature from increased gross motor skills, agility, stress reduction, cognitive development, improved social interaction, independence, healthier immune systems, and of course a respect for nature.

Our dream for our playgrounds are lots and lots of magical pockets. You can’t build magic overnight. This is a large part of why our annual gardening day is so important to us. Every year we ask parents to offer a few hours to come together as a community and plant (or chainsaw as the case may be?) a little extra magic on our playspaces. If you have the time to help us get there, then grab a shovel and some pixie dust and join the party April 21st.
Posted by Webmaster at 12:59 PM No comments: