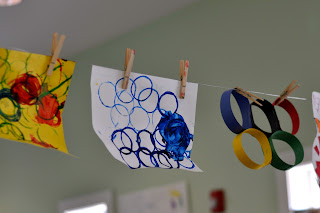 London wasn't the only hotspot for Olympic fever in the last month. Many Little School classes got into the spirit with their own Olympic happenings.

TLS Campers made an Olympic arena out of the magic tree, complete with uneven bars (aka a bent tree), a balance beam/vault, and a volleyball/beachball court. There was even a NASCAR track... still yet to be an Olympic sport, but one can hope (come on Rio 2016!) Campers designed their own gold/silver/bronze medals, and looked fab-u-lous sporting their constructions. 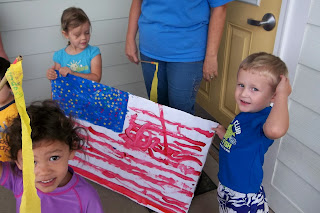 Up and down the halls of the yellow building, student's flew flags of their own designs. Amy's class did a two week Olympic study where they celebrated both team USA and all the countries and  cultures of the world.  Amy writes:

"Each day we compared the weather in London and Hillsborough and talked about it would affect the athletes and the fans.  We painted Olympic rings and talked about how the 5 colors represent the colors on the flags of the countries participating in the games, and also the original five areas of the world where the athletes came from.  We read many books about the Olympics including Magic Tree House: Hour of the Olympics which taught us a lot about Ancient Greece.  In housekeeping we pretended to open stores and restaurants for in London and in blocks we tried to make an Olympic pool, stadiums, and even Buckingham Palace!  We also kept track of the Team USA Medal count and talked about many different sports and athletes in the games." 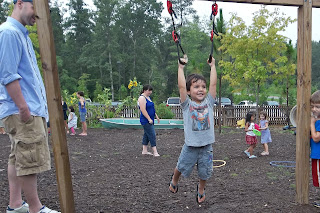 Amy's class joined up with Lori/Laura's class, as well as Dana's Pre-K for a big Olympic field day. Kids began the event with a parade through all five playgrounds to rival London's opening ceremonies. Soggy weather was nothing to these athletes. The kids took part in all sorts of Olympic events, such as rings, tumbling, relays, balancing, and even the ever tricky Olympic bubble blowing. Many thanks to the parent volunteers who helped the event run smoothly.
As for the rest of the world, watch out for the Olympians of the future... TLS has the gold in bubble blowing wrapped up!
Posted by Webmaster at 4:49 PM 1 comment: 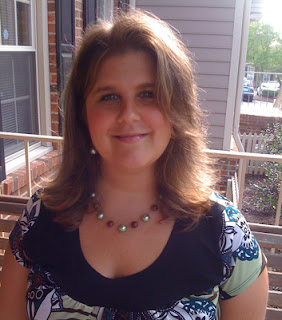 On August 1st, the new Little School at Duke opened its doors to a entire fresh group of teachers and administrators. This new team is spending the month creating their beautiful  rooms, learning about TLS, and most importantly, grooving as a family. One of the leaders of this new family is an old friend to TLS, Kris Ketchum. I asked Rachel to introduce us to Kris:

"Kris K. what can I say.  Kris has been a part of The Little School vision since it’s inception in 2004.  But I, Rachel Bachenheimer, have known Kris since I was 18 years old (a long, long time ago:) as the afternoon teacher in her 4’s and 5’s class.  Many years later I worked with her at CCSA (Child Care Services Association) where she was the Infant/Toddler Specialist.  Now I am so excited and feel so lucky to work with her again where she is Program Director of The Little School at Duke!  Here is a little bit about our wonderful Kris Ketcham." -Rachel

One lovely day in 2004 I received a call from two ladies requesting my assistance in opening up the highest quality child care center ever developed.  I met Christa, Jennifer and Mary at Christa's home where we sat at the kitchen table broadening The Little School's dream.  The biggest and "most professional" advice I gave these women was, "If you build they will come" and boy they haven't stopped building yet!  Over the years I continued to be their Infant Toddler Specialist, starting at Davis Road moving our way through Waterstone.  When the Duke site became a vision Christa and Jennifer asked me join the team exclusively, which meant I would not be driving North and South on I-40 across the State everyday.  Now I am walking between the North and South buildings at the Duke Campus.

* What was the most interesting trip you have taken?

My Peru trip where I traveled down the Amazon hiking the rain forest, meeting Villagers and teaching one day in a school house.  I was in areas where there was no running water, electricity and homes without all four walls or rooms.  It was an experience of a lifetime!

* What movie or work of fiction has had the biggest impact on you? Why?

JAWS!!!!!!!!!!  I was a fish growing up, especially since I grew up on Long Island, and when I watched that movie I became afraid of what was lurking in the water.  Not to mention the movie was based on a vacation spot called Amity Island and I lived close to Amityville (don't even mention the Amityville horror story)

* If you could offer a newborn child only one piece of advice, what would it be?

Would you rather be a worried genius or a joyful simpleton?

I would rather be a joyful simpleton for sure, because I believe strongly in Peace, Love and Happiness!  Life is too short so I try not to sweat the small stuff!

* If you were an animal, what would you be? Why?

My Cats Bou Bou and Kit Cat for they are spoiled, loved, spoiled, well taken care of, spoiled and well spoiled!

A CHP Motorcycle Cop! I loved the TV show CHIPS about two motorcycle cops in California and that is all I wanted to be at that age.  I even rode my banana seat bicycle up and down the streets of NY keeping them safe from fearful motorists (of course I thought I was much faster than I actually was but being a dreamy kid that is all I needed)

* What words do you live by?

Two sayings I live by  "They don't care how much you know, until they know how much you care" (regarding my job as a mentor, coach and director of teachers)  And "It is not quality for a day; it is quality forever" (regarding caring for children).
Posted by Webmaster at 6:46 PM 1 comment: