The Case of the Missing Gerbils 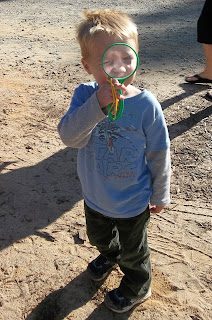 There are oodles of paths to learning, and bazillions of theories on the best early education practices. Obviously, the best way to learn is to LOVE what you are doing. Easy-peasy right? However, we all love different things and learn in different ways. If you are going to get me anywhere near interested statistics, you are going to have to think WAAAY outside the box. How oh how do you make that work in a classroom with 18 different kids, with 18 different strengths and 18 different visions? I asked Laura of the Diving Dolphin's to tell us about a recent project that sparked brain magic in their kids.

"Several weeks ago, the Diving Dolphins became interested in maps, mysteries, and spy glasses. Soon we were seeing mysteries everywhere! Every lost sock and missing marker cap became an opportunity to look for clues and solve the puzzle. The class started to come up with questions, and search for the answers. Why did Mr. Sean cut down that tree? Did he need to make a wooden pumpkin out of it? We tracked down Mr. Sean and found out the truth. We made our own spyglasses and maps, and used them to navigate the playspaces and the woods.

"This week, we came across the biggest mystery so far: our gerbils, named Cat and Snake, went missing! We followed clues and solved puzzles all over the school, magnifying glasses in hand, until at last we found our pets and returned them to our room! We were so happy to see them, and have been talking about the "long mystery" for days." - Laura Hasslam 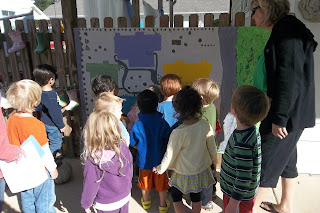 Aside from the obvious fun and excitement two lost gerbils generates, what's going on here? What's the point? First and foremost, the kids had more FUN then a barrel full of gerbils. Moreover, their investigation into mysteries worked every nook and cranny of their spongy little minds- investigating the mystery, searching for clues, and hazarding guesses flexed their cognitive development such as problem solving, persistence, and memory. As the kids poured over maps and metaphorical knots, they stretched language and literacy development. They followed multiple stepped instructions, print concepts, and even used math and counting skills. So yes, they had fun, but with the purposeful guidance of their teachers, they also continued to build and grow into not simply learners, but THINKERS and visionaries!
Posted by Webmaster at 2:43 PM